As Grand Central Terminal’s front yard, Pershing Square provides the city’s most dramatic views of the Beaux Arts façade of Grand Central Terminal. A much-needed open spaces in Midtown Manhattan, the plaza is about to get its due, as Quennell Rothschild & Partners’s design transforms it into a more comfortable, sustainable, year-round public space.

Following the wishes of the community, the firm has designed the plaza as an extension of the beloved station.  Some of the timeless materials — bronze, granite, oak – used in Grand Central are also being deployed in the plaza, whose paving pattern will echo the herringbone forms of the station’s vaulted ceilings.

The east side of the plaza, flanked by the historic Pershing Square Viaduct, will be terraced for use as an al fresco dining area for the adjacent restaurant. Its border with the public, west side of the plaza will be subtle and sinuous.  Moveable tables and chairs, sheltered by an informal cluster of honey locusts, will invite commuters, workers, and residents to linger, while curved benches alongside lush plantings will offer year-round seating.

Some of the stormwater falling on the plaza will be used to irrigate the trees, but most will flow through a rain garden of sedges, ferns, sweet flag and iris, where it will be cleansed and infiltrated. At the south end of the plaza, two planters full of lush grasses, subtly varied in texture and color, will form a gateway into the plaza. Excess water from a drinking fountain will be recycled to irrigate the grasses.

The designers deftly handled some complex constraints, including emergency access, underground vaults and utility infrastructure. Structural soil will be used to support heavy vehicular loads while providing a healthy root zone for the trees.

URS Corporation is providing civil and structural engineering, and is the prime consultant for the project.  Funded and initiated through New York City DOT’s Public Plaza program, the project is being coordinated through the Department of Design and Construction. The Grand Central Partnership business improvement district will provide maintenance and programming for the site after construction is complete. 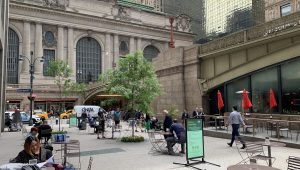