On the strength of the landscape architecture master plan prepared by Quennell Rothschild & Partners, the Bushnell Park Foundation raised over $10 million for the restoration of Hartford’s 35‑acre central public park, created in 1858.  The firm was subsequently engaged by the foundation to execute a series of projects that transformed the park into a welcoming focal point for the Hartford community as well as a verdant foreground for the Connecticut State Capitol.

Among the projects was the repair of Corning Fountain, the symbolic heart of Bushnell Park, which had not operated for nearly twenty‑five years; a major reconstruction of the pond, long plagued by leaks; installation of new lighting and irrigation systems; and the repair of three main entrances to the park.

The perimeter arcade of oaks and elms was restored, and over 500 new trees were planted, whose diversity has made the park an urban arboretum.  The plan also included the establishment of a permanent maintenance endowment.

A new pavilion, designed in conjunction with architects Buttrick, White & Burtis, has brought performers to downtown Hartford, while an innovative children’s play area, designed as both a play and learning environment, reflects the historic location and the area’s natural history. 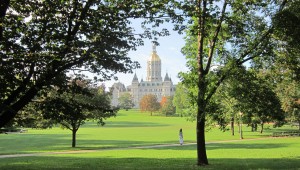 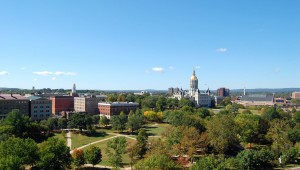