At the General Theological Seminary in the Chelsea neighborhood, Quennell Rothschild & Partners designed a courtyard between a new residential building and the historic inner open space called “The Close”. The Seminary block, known as Chelsea Square, is on the National Register of Historic Places. The new courtyard, built of brownstone walls, large slabs of bluestone paving and wrought iron fences emulates the surrounding historic fabric, seamlessly negotiates a 7-foot change of grade and artfully integrates the new development into the quiet elegance of the Close landscape. The new residential building, designed by Ennead Architects, also provides a much-needed modern library for Seminarians on the ground level (the library interior was designed by Beyer Blinder Belle Architects). A sloping path which navigates around a large bed of ornamental grasses and daylilies also provides an ADA accessible route from the Close to the library.

Building terraces and two parts of the main roof are landscaped as building amenities with one roof space designed as a wood surfaced sun deck with native wind-blocking plantings, grasses and comfortable lounging furniture and an outdoor fireplace. The opposite side of the roof is developed as a family area with a small play area covered in safety surfaces for small children adjacent an open area for communal barbecues. The non-accessible areas are developed as a green roof which reduces reflected urban heat and helps absorb rainwater.

Quennell Rothschild & Partners has continued to work with the developer of the Chelsea Enclave, The Brodsky Organization, in creating new residential projects on the Seminary campus, including the renovation of the West Building originally built in 1836, a new building built on the grounds of the Seminary tennis court and a new boutique hotel on Tenth Avenue. 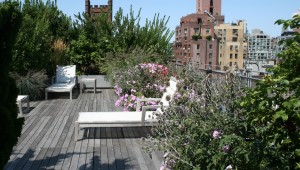 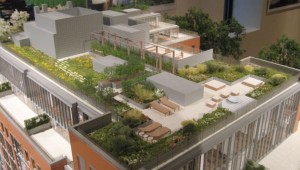