Quennell Rothschild & Partners collaborated with Architect Toshiko Mori on the design of the Visitor’s Center for the Darwin D. Martin House in Buffalo, NY. The Martin House, designed and built in 1903 to 1905, is a world-renowned example of Frank Lloyd Wright’s prairie-style architecture. It has been meticulously restored to its original condition and opened to the public as a house museum. The Visitor’s Center was the subject of a high profile design competition which was awarded to Toshiko Mori.

The landscape of the Visitor’s Center is designed to mediate between the Wright/Martin gardens and the elegant modern vocabulary of Mori’s glass-walled pavilion. The paving of the exterior courtyard relates to the Martin House tiles and is shaded by a canopy of Honey Locust trees. The space serves as a gathering and an orientation area where tours meet before proceeding onto the historic Martin Property. A low dry-laid stone wall recreates the original topographic separation between the neighboring properties. Under the Honey Locust trees are beds of dense mixed ferns.

Directing visitors from Jewett Parkway to the Visitor’s Center is a wood wall clad in wisteria vines that echoes a favorite Wright motif and subtly introduces visitors to the complex.

The Greatbatch Pavilion was a World Architecture Festival Award Finalist and was awarded an AIA award of excellence. 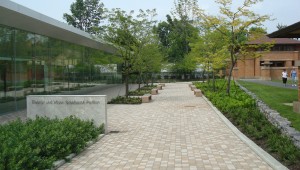 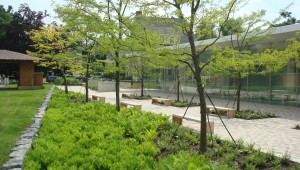