Quennell Rothschild & Partners design for Far Rockaway Park provides much needed park and play facilities for a neighborhood that many locals felt had been ignored by the City for years. Our fresh and playful vision incorporates active and passive recreation, innovative design and sustainable features into the park. The project stretches for a mile along the Atlantic waterfront, but was separated into two construction projects for NYC Parks, funded through the 2030 PlaNYC initiative. Both park areas opened in the summer 2012.

The park design responded to the community’s requests for a long list of facilities; Alison Shipley, a partner at Quennell Rothschild & Partners who led the design, noted that “it was important to us not just to include the uses requested, but to integrate all the activities in a way that encourages social interaction and inclusiveness.” Paths and seating areas weave through the active areas, providing plenty of places for casual spectators, who become part of the action.

The size and complexity of the project involved multiple permitting issues and coordination with city agencies including NYC Parks as the lead agency, NYSDEC, NYCDEP, NYCDOT and NYCDSBS, as well as an extensive public outreach program to reach a consensus on the park design. The DEC Coastal Erosion Hazard Area limited the extent of new work at the beach side of the site, and required an additional level of reviews and approvals.

At the east side of the park a former parking lot has been transformed into sculpted hills that recall giant sand dunes behind the beach – covered with green lawns they provide space to play, relax or catch a great view of the ocean. Hundreds of shrubs and ornamental grasses and over 700 new trees were planted, which will mature to provide welcoming shade. The hills are ringed by serpentine paths and seating areas and a covered stage designed by WXY architects anchors the western end with the sloping lawn providing beach blanket seating for summer shows and events that draw large audiences.

Next to the lawn area a new 15,000 square foot skateboard park has been an instant hit since it opened.  As part of a focus on getting kids and adults active, less traditional activities such as a unique climbing rock, ping pong tables and rope play areas have been successful in getting girls as well as boys involved in the action.  Handball and basketball courts are also popular, and a tree planted plaza between the courts and skate park includes places to sit, rest or workout.

At the west side of the park an abandoned parking lot was transformed into a synthetic turf sports field, sized and striped to allow play as a full-sized soccer and football field.  The field is the new home of the Rockaway Ravens boys and girls soccer and football teams, and includes bleacher seating and a 100 meter running track.

Next to the field a new comfort station designed by architects WXY features a tiled, green striped exterior and a dramatic undulating roof that extends to form a covered pavilion providing a shaded rest area that also serves as an outdoor classroom for the adjacent public school.  The comfort station design was closely integrated with the landscape, and the mechanical room houses equipment that serves the nearby play area.

The large new play area includes zones for young children, older children and a separate “challenge course” for teens.  The custom designed roofs over the play equipment provide shade and relate to the roof at the comfort station. Within the playground, a nautical themed water play area has a red fire boat with aim-able spray canons for water fights, and a sand area with play excavators and water tables for mixing up batches of mud. The nautical theme is reflected in the watery blue patterned rubber play surface and a deck of recycled plastic lumber links the play areas with a restored wetland area that was planted to attract native birds and butterflies.

Storm water throughout the park is infiltrated on site, with no connection to city storm drains. The synthetic turf field was designed to promote drainage through an under drainage system connected to large diameter infiltration pipes.  The spectator area and parking lot drains to planted rain gardens that include grasses, shrubs and trees that will soon shade the bleachers.

Much of the furniture was custom designed by Quennell Rothschild & Partners including fitness stations and small shade structures, precast concrete tables and stools, loungers at the beachfront of concrete and heat-treated Ash lumber, and large pebble-shaped seats of precast concrete designed to encourage lounging, stretching, and sitting in more playful and social ways.

Sustainable features are integrated into the park design; trees, lawns, maritime grasses and plant beds have replaced pavements. Where paving was needed, many of the new paved surfaces are permeable to allow water to percolate into the sandy ground below, or light colored to reflect the heat of the sun, helping to keep the air cool. Rain water is all captured on site and used to water the new plants. Plants were selected for their tolerance to the harsh beachfront environment of winds and salt spray, and include native trees and shrubs, seashore grasses and perennials, maritime grass areas and salt tolerant lawn grasses.

The transformation from flat fields of asphalt to green and active park spaces is a dramatic change that has been welcomed by locals who have flocked to the park since the opening. Previously, despite the beach location, many locals stayed away – with no shade and few amenities there was little to draw visitors except the beach. Now the park is a year round destination with places to sit and play in sun or shade, with shelter from winter winds or on a hill top to catch summer breezes.

Despite its beachfront location the park escaped major damage from hurricane Sandy. The sculpted landforms, durable materials and drainage system designed for infiltration contributed to its resilience.  In the play area the equipment was undamaged, but the storm water lifted the play surfacing from its base and left behind large amounts of beach sand. The park had already become an important place for the community, and after the storm hundreds of local volunteers helped to clear the sand from the playground, working side by side with Parks staff. Parks Commissioner White said in a Daily News interview about the effort, “It is important in communities impacted by the storm to have a place for children to go, for people to go, to get out of their homes and try to resume a normal life. This is a very special playground.” 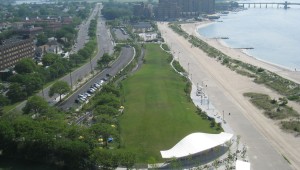 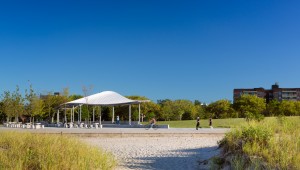 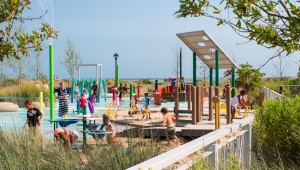 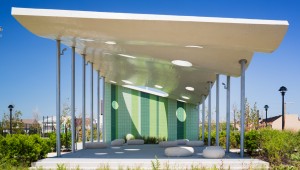 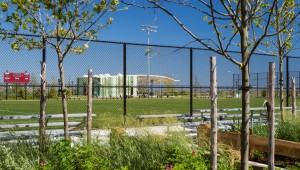 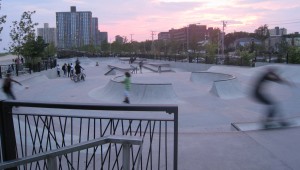 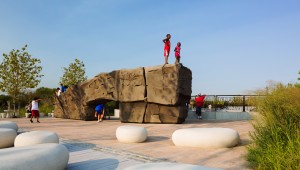