Quennell Rothschild & Partners with architects Smith-Miller + Hawkinson prepared a master plan for NYC Parks to provide a framework for improvements to Flushing Meadows Corona Park, a 1,250 acre public park in Queens that was the site of both the 1939 and 1964 Worlds Fairs. The plan proposes a broad set of goals for the Park’s future that address the Park’s significant problems – poor drainage, silted up lakes and excessive areas of paving (much of it left over from the 1964 World’s Fair) and a confusing pedestrian and vehicular circulation system.

The World’s Fair core is repurposed as a major new Festival Grounds. The Plan will reduce the number and width of existing paths in the Core area, re-envisioning it as a celebration of the best of the two World’s Fairs, with a new, greener landscape. A new major public gathering space is proposed on the current site of Fountain of the Planets. Iconic elements of the World’s Fair such as the Unisphere, the Queens Museum and Theater in the Park and the New York State Pavilion, will all be retained and restored. They are key elements in the Park’s historic narrative and will be highly visible examples of adaptive reuse.

Both Meadow and Willow Lakes will be restored and reconfigured to improve their roles as natural and recreational resources. This work will include the removal of harmful exotic plant and fish species, and the addition of native wetland and aquatic plant species. Constructed wetlands will be introduced to handle runoff from the highways that surround and bisect the lakes and the buried Flushing River will be reopened to create a continuous ribbon of water throughout the Park.

Access to the park will be improved from the surrounding neighborhoods and highways through improved signage, circulation and parking. Within the park, a planned corridor of activities will focus greater programmatic density along well defined routes to create a more vibrant park experience and better planned natural areas and open space. The creation of a new inter-park transportation system will shuttle visitors between the cultural centers while a free bike share program would allow individual riders complete access to the Park.

The Plan also suggests a series of sustainability goals for all new and future projects, including reuse of all materials on the site, alternative energy generation, improved drainage, planting strategies, net gain in habitat, and alternative transportation. The plan proposes that the park become a laboratory for sustainable design where professionals can undertake serious research, and be a model of how a large public open space can integrate the needs of its users and the underlying ecology of its site. 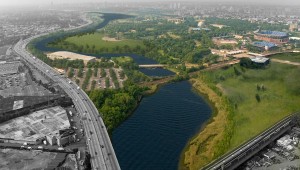 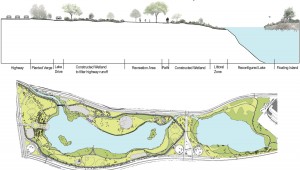 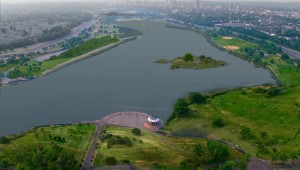