Watch the video: locals talk about what Frederick Douglass Circle means to them.

For this project located at the northwest corner of Central Park, Quennell Rothschild & Partners designed the pedestrian streetscape for a new traffic circle and led a team of artists and designers in the creation of a dramatic memorial to Frederick Douglass within the large central island. The project also included restoration of the northwest entrance to Central Park and reconstruction of the Cathedral Parkway, symbolically connecting the site with the Olmsted-designed Morningside Park one block away.

The City of New York and the Central Park Conservancy initiated the project to honor this key figure in the abolitionist movement, as well as to revitalize the neighborhood, create a symbolic gateway to Harlem, and restore the derelict Central Park entrance and perimeter sidewalks.

In addition to a figurative sculpture, the quarter-acre memorial includes a series of elements that illuminate Douglass’ life and the plight of escaping slaves about whom much of Douglass’ writing and oratory were focused.  Varying hues of granite pavement and sculptural granite benches describe patterns from the slave quilts associated with flight from slavery. The figurative sculpture stands atop a quilt pattern representing the North Star (which is the name of the widely-read abolitionist newspaper Douglass published).

A linear fountain studded with illuminated stars and pointing northward suggests the celestial constellations that guided slaves escaping by night. Cast into the bronze fountain wall are key quotes from Douglass’ speeches as well as his biography. Recirculated water spills  in a sheet over the west face of the wall, causing the stars to shimmer at night. The splashing sound of the fountain masks noise from the adjacent street. On its east side, the fountain features a gentle ebb and flow of water over carved granite paving, suggesting the Maryland tidal environment that played a significant part in Douglass’ early life.

Providing much-needed shade for the plaza, ten Sawtooth Oak trees are planted in a structural soil layer extending under much of the paved area. Subsurface drainage and waterproofing were integrated to protect subway tunnels located below. Around the circle and along Cathedral Parkway, new street trees (also planted in structural soil) enhance the sense of linkage between the two parks and create a cooling shade canopy for the heavily-traveled streetscape.

In consultation with City historic preservation specialists, QRP also detailed restoration of the Central Park wall, sidewalks, and gate elements. The firm designed modifications to the c.1887 entrance walls and piers to meet Central Park Conservancy’s objective of encouraging pedestrian use and closing the entrance to automobile traffic. Primary gate piers were relocated following the typology of Central Park perimeter entrances, and new segments of perimeter walls were added. The project required replication of historic monolithic carved bluestone piers, schist wall copings, and coursed ashlar wall stone, as well as restoration of existing wall segments. Foundations for the wall were carefully constructed to avoid damage to roots of the nearby mature trees.

The memorial plaza and Central Park frontage were carefully designed to fit the maintenance capabilities of the Central Park Conservancy staff, which will be responsible for operations and upkeep. An under-sidewalk vault houses fountain and lighting equipment for the memorial. A raceway inside the fountain wall provides access for maintenance of the plumbing and fiber-optics.

To garner public support and allow a sense of neighborhood ownership of the results, the project included an extensive program of public involvement in the programming and design phases, including public meetings, workshops, and exhibits. Quennell Rothschild & Partners also played an integral role in coordinating public artist selection for the memorial, including establishing baseline design criteria and assisting in artist selection.

The firm’s work included developing a design strategy to meet the Conservancy’s goals, preparing detailed construction drawings and custom specifications for the reconstruction work. The firm subsequently oversaw construction in consultation with the Central Park Conservancy. With the Department of Design and Construction as the client agency, the project required coordination with DOT, DEP, ConEdison, MTA, Parks and Recreation, Public Design Commission, Landmarks Preservation Commission, the Department of Cultural Affairs, and two community boards, among other agencies and entities. 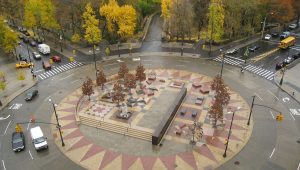 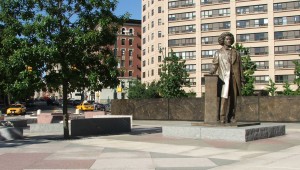 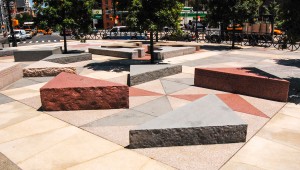 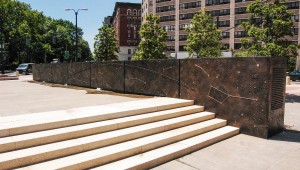 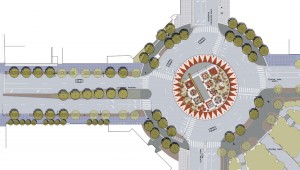