QRP collaborated with artist Alison Saar in the design of this memorial plaza honoring Harriet Tubman, a principal “conductor” of the Underground Railroad and one of the country’s most courageous historical figures. Constructed at a prominent corner where Frederick Douglass Boulevard and St. Nicholas Avenue intersect, Harriet Tubman Plaza enlarges what had been a derelict traffic triangle, creating a new public plaza and city landmark. In bronze, granite and earth-colored flagstone, the plaza evokes the riverine landscapes through which Harriet Tubman braved personal peril to locate and rescue numerous southerners from the chains of slavery.

Saar’s 14-foot bronze representation of Tubman bears like a locomotive into danger, evocatively trailing gnarled bronze roots from a massive, outcrop-like granite base. The riverine inner plaza, defined by rustic-finished monolithic granite, carves through the triangular geometry of the plaza island.  Red oaks, inkberry, beach rose, and other plantings selected for significance in Tubman’s life history provide a green backdrop from which the Tubman figure emerges toward the intersection. In a dramatic gesture requiring extensive technical coordination with the NYC Transit Authority, the design transformed a 60-foot-long subway vent grating into a serpentine river-like shape, to complement the swirling edges of the plaza.

Manhattan Borough President’s office initiated the project, which was jointly administered through the NYC Department of Design and Construction and the Department of Cultural Affairs. URS Corporation provided engineering services for the project.  John Reddick of the Central Park Conservancy assisted the design team in facilitating the collaboration and coordination with a variety of public agencies. 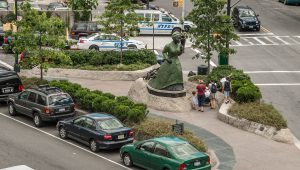 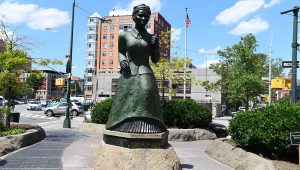 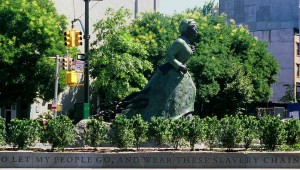