Quennell Rothschild & Partners led a team of design professionals and technical experts to create the master plan, overall schematic design, and design guidelines for this 4.5 mile long park on Manhattan’s west side, parallel to Route 9A. After many years of public debate which surrounded the project, the firm’s plan described an exciting new vision for the 550-acre park and won widespread support. The plan features:

Quennell Rothschild & Partners developed and led an extensive public participation program, working closely with three Community Boards, their park and land use subcommittees, the Chelsea Waterside Park Committee, the Hudson River Park Advisory Committee, several civic organizations, and the public at large. In addition, QRP actively participated in the Route 9A outreach program which included weekly coordination meetings between the Route 9A and HRP teams.

This aggressive program proved very successful in building consensus for the master plan and supporting the Route 9A community approval process. The resulting design represents a feasible, broadly supported plan for the park. The Master Plan was awarded the American Society of Landscape Architecture Merit Award in 1998.

The several segments of the Park that are now complete or under construction, have become some of New York’s most heavily used and best-loved open spaces, fulfilling the long-held dream of restoring the waterfront to public use.

The Design Guidelines include detailed recommendations for paving materials, furnishings, railings, lighting and signage. Many of these recommendations have been incorporated into the final construction, including the street names in stone paving bands at the water’s edge and maintaining open view corridors at all cross streets. We worked closely with ecologists on strategies for site development, and developed a palette of plant materials which could withstand the windy, exposed, waterfront location, and also occasional flooding by saline river water. The concept of planting on berms provided adequate soil depth above the flooding elevation and also helps to buffer the park from traffic noise. In this phase we worked closely with several artists, including Vito Acconci, Andrea Blum, Reiko Goto and Tim Collins, on integrating art into the landscape design, and identifying specific locations where this would happen.

Following completion of the Design Guidelines, schematic design documents were completed for Segment Four, located in Greenwich Village between Morton Street and Pier 40, and this was the first phase of the project to be constructed. The work included coordination with the artists Andrew Ginzel and Kristin Jones, designs for a water taxi stop and a bridge over the bow notch, a children’s play area on Pier 51, an active recreation space on Pier 46, and passive uses on Pier 45 where shade structures and lounge chairs, with a large open lawn and wood decking were proposed. 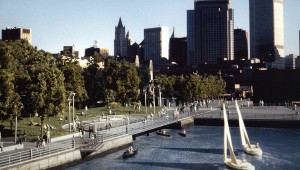 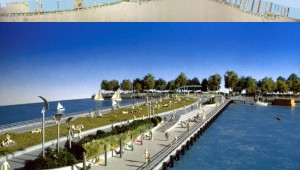 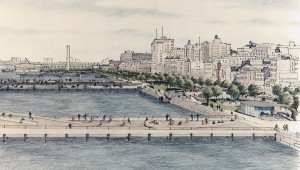 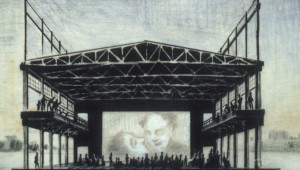