The Land Port of Entry at Massena is a General Services Administration (GSA) Design Excellence project located along the St. Lawrence River on the US / Canada border.  As a “front door” to the United States, the campus landscape and architecture organizes the myriad procedures involved in the processing of private and commercial circulation while providing a message of optimism and openness.

The composition of buildings and roads is carefully integrated within native and created wetland areas to maintain an ecological balance at the site.  Wetlands, bioretention basins, and bioswales  designed by Quennell Rothschild & Partners both visually and ecologically mitigate the extensive pavement required for orderly circulation. At every point, environmentally-conscious solutions and techniques for site and buildings were seamlessly woven into the overall design strategy to provide the public with a LEED-certified project that offers a new idea of the border crossing station. In addition to creation of new mitigation wetlands, the site design includes wetland treatment of stormwater through creation of stormwater-treatment wetlands, bioretention areas, and bioswales. Planting design utilizes exclusively native species of trees, shrubs, and grasses. To achieve simultaneous design requirements for surveillance and limited maintenance, a special native grass/ wildflower mix was developed to cover non-wetland portions of the site with low growing meadow cover.

In addition to the St. Lawrence on the north, the site also abuts along its southern edge the pristine Raquette River, which emanates from the Adirondack mountains. With large areas of wetlands and diverse woodlands between the two rivers, the site had been an ecologically rich zone. It has also been an important resource for Native Americans of the Ahkwesahsne Mohawk tribe, a large community of which still reside in the area. During the Robert Moses era, much of the land around the site had been filled and drained to create the original port complex. Major goals for the new project have been to reverse the previous adverse impacts and to integrate the new facility in a way that would restore the ecological integrity of the site to the greatest practical degree. Because the overall project represents a significant further expansion of paved area and structures, the project involved more than 22 acres of wetland-related construction.

To effect the transformation, large expanses of mowed lawn and other disturbed areas were converted into mitigation wetlands by redirecting culverts and regrading the site into a series of subtle terraces separated by low berms. The terraces were seeded with a variety of native seed mixes:  low wet meadow/emergent, wet meadow/emergent, scrub/shrub margins, forested areas, and uplands. Within each terrace a further variety of mesic conditions were created through a randomized texturing of the surface. Native trees were planted to complement the mixes with each zone.

To handle the substantially increased flow of runoff from the expanded facility, a series of stormwater wetlands were also created according to standard models defined by Department of Environmental Conservation. The created wetlands were planting with primarily with plugs of a variety of native species chosen to match mesic conditions and wetland zone types, including bulrushes, Spatterdock, Fowl Mannagrass, sedges, Arrowhead, soft rush, iris, and red top. Herbaceous species were supplemented with plantings of Arrowood Viburnum, Winterberry, American Elder, and other shrub species.

Where prior construction had left abrupt breaks in the woodland canopy along the site margins, a “feathered edge” of additional tree plantings was placed to visually soften the woodland edges.

Orientation over the 57-acre site is achieved through a cohesive language for roads, buildings, and landscape. The color yellow, ubiquitous and cautionary, is used throughout the site to define destinations for public processing. Swaths of painted yellow surfaces structure a wayfinding geography for vehicle and pedestrian operations.

Quennell Rothschild & Partners worked closely with a range of disciplines on the project, including architects Smith-Miller+Hawkinson, Arup civil and structural engineers, as well as security specialists. 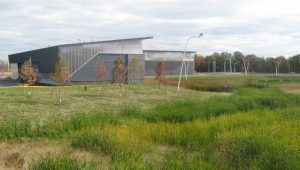 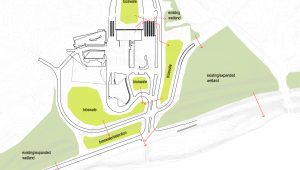