Morningside Park, located between the Harlem and Morningside Heights neighborhoods of Manhattan, provides its neighbors with 30 acres of parkland with active and passive recreational facilities, diverse topography and magnificent views from its upper elevations. Despite the additions and alterations which have been made throughout its history much of the original park plan remains, an important example of the work of landscape architects Frederick Law Olmsted and Calvert Vaux. Their design for Morningside Park was finalized in 1887, after the completion of their plans for Central Park and Prospect Park.

Neglect and reduced maintenance led to widespread deterioration of the park following the 1968 community protests which forced Columbia University to abandon its plans to construct a large gymnasium in the park, and the park further suffered from historically strained relationships and negative perceptions between Central Harlem, Manhattan Valley and Morningside Heights.

In 1985 Quennell Rothschild & Partners was commissioned to prepare a master plan for the park, and after leading intensive discussions with community groups and the New York City Parks Department, the firm developed a comprehensive master plan for the reconstruction, restoration and rehabilitation of Morningside Park. The plan achieved consensus within the community through a balance between the recreational needs of local residents and the desire of the city and local interest groups to restore the park to its original 1887 design by Olmsted and Vaux.

The firm developed the landscape architecture master plan to construction documents for the first phase of the project, completed in 1988, which focused on the south end of the park. The work included a new pond and dramatic waterfall at the rock outcrop where Columbia University had abandoned its gym construction, leaving a gaping pit in the ground which had remained a fenced off eyesore since 1968. This dramatic feature made what had been the least desirable portion of the park into a wonderful gathering spot, fully integrated with the original design. The rock was shaped into natural formations, steps were integrated into the slope, and plantings softened the edges. It is now one of the most popular locations in the park, not only for human visitors but for many birds and butterflies attracted to the water and surrounding vegetation. Also included were a picnic area adjacent to the pond, a large lawn area with two softball fields and a renovated field house, as well as renovation of the seriously deteriorated landscape and reconstruction of the park’s walkways at the southern portion of the park.

The restoration work was warmly embraced by the neighborhood, and helped to break down some of the mistrust that long time residents had for any construction project, as residents have rediscovered the park and began working together for its future. But fiscal crises of the 1990’s put further work on hold, leaving the central and northern portions of the park to remain in poor condition. In 2001 the Friends’ of Morningside Park approached Quennell Rothschild & Partners with a commission to update the Master Plan to guide future restoration efforts and provide the renovations needed for the park to serve new generations of families and children.

The new Master Plan, completed in 2002 is the result of a newly re-energized commitment by surrounding neighborhoods to return the entire park to useful service. It builds significantly on our previous plan, updating suggested improvements to reflect current conditions and needs. The Plan proposed comprehensive improvements and renovation of the park beginning at the northern section. The work will balance sensitive restoration of the park’s historic features with rehabilitation of infrastructure, and will focus on stabilizing severely eroded and overgrown slopes, clearing overgrown rock areas, and bringing back the distant vistas from the park to the city and beyond. Throughout the park the inadequate drainage and water supply systems will be rehabilitated, paths and steps will refurbished, and walls, paved areas, park furnishings will be renovated or replaced.

The Plan proposed $19 million of park improvements, and developed a phasing strategy and budgets for the work, with implementation to be phased over several years, each phase carefully coordinated to maintain use of the park while restoration work is carried out. The Friends’ of Morningside Park intended the plan to be financed through a combination of public and private funding, and the Plan has been successful in helping them to secure funds for several of the proposed projects which have now been completed, including renovation of steps and paths, and a major renovation of the 116th Street Playground which will begin construction this summer, funded by the City Council. 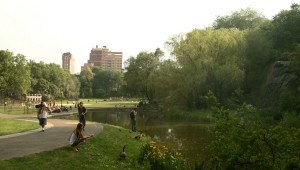 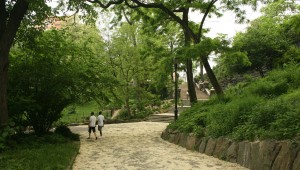 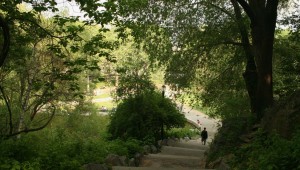 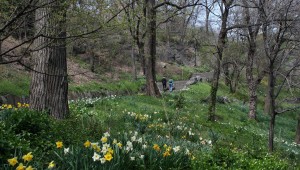 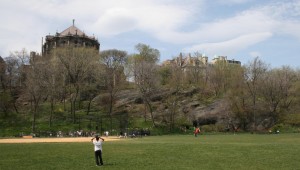