New Haven’s historic 17-acre green was created in 1638 as the City’s first public open space, but despite its location at the heart of the city, by the 1980’s it had fallen into serious disrepair.  Quennell Rothschild & Partners developed a master plan for this historic park with specific implementable proposals for its restoration and recommended management and fund-raising strategies to implement the proposals.

QRP worked with the newly established Foundation for the New Haven Green to bring about a comprehensive improvement of the Green, coordinating the work with city, state and federal agencies, and the firm led a public outreach program to build support for the plan.

The master plan prompted an outpouring of more than $4 million, and created an additional $1 million of permanent endowment funds to maintain the results. Using a combination of public and private funds, Quennell Rothschild & Partners designed and implemented a comprehensive phased renovation plan. The entire project including planning, funding and construction was completed in just three years, with QRP responsible for all design work, construction documents and supervision of the phased implementation of the plan.

All the projects outlined in the firm’s plan have been completed, and the improvements include:

Since the completion of the restoration work the historic Green has returned to its place as the city’s civic center, and has become a popular gathering area with numerous events.  The work also encouraged the restoration and development of the surrounding downtown blocks, making a significant impact on the city’s resurgence. 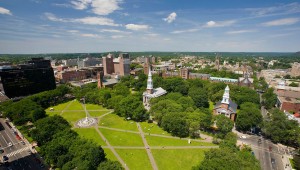