Recognized as a potential future target after the September 11th attacks, New York City’s Financial District was immediately made more secure, with detrimental impact on the urban landscape. As part of a multi-disciplinary design team, Quennell Rothschild & Partners collaborated toward a unique solution to the new security requirements. The team created an opportunity to bring new life and vitality to the neighborhood by recognizing that the problem is not how to secure the perimeter, but how to prevent the threat of attack from destroying the public realm.

In response to the changing dynamic of the neighborhood, the landscape architects converted traffic control for security reasons into an opportunity to give space back to the pedestrian. By moving traffic away from the historic structures of the Financial District, we were able to create well-used pedestrian plazas on Broad Street. One space, anchored by the NYSE and Federal Hall, is a prime destination for tourists and the lunch crowd. Tables, chairs and custom limestone benches provide opportunities for gathering, socializing and people-watching. Daylight studies were conducted to determine the sunniest location for another new plaza that was carved out further south on Broad Street. The new space extends the adjacent sidewalk and provides additional pedestrian friendly space, separate from the vehicles. The team worked with the New York Stock Exchange and its security consultant to minimize standoff requirements, reclaiming desperately needed public space.

The project connects the program of the contemporary streetscape with the historic, originally built by the Dutch. Wood block pavers evoke the eponymous palisade “wall” of Wall Street, the original security perimeter of New Amsterdam. Engraved granite curbs convey the chronological history of the area, including of the original “curb market”, the predecessor of the current stock exchange. And special pavers mark the canal that once ran down the middle of Broad Street.

This project is just as much about what is not there now, as what is. The cacophony of disparate and shabby street furnishings, signs, poles, bollards, curbs, paving types, ramps and hydrant fenders, were removed from the district. They were replaced with new granite street curbs, landmark gray concrete sidewalks, and elegant street furnishings consistent with the standard for the larger Lower Broadway district. The streets were re-paved with granite setts, adding to the historic charm of the area. The result is a dramatic contrast from the formerly chaotic environment to a clean and calm one. 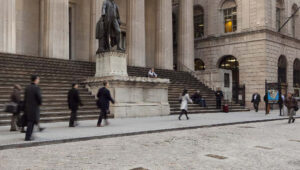 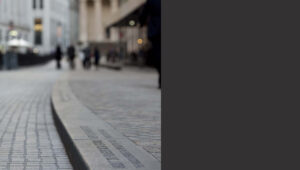 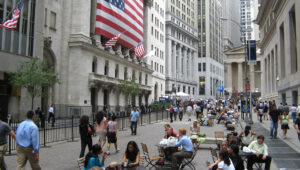 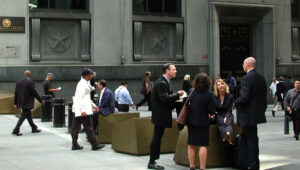