Quennell Rothschild & Partners has been working with the Village of Port Jefferson on Long Island’s north shore for over 13 years, preparing plans for phased waterfront improvements. The first completed project was Harborfront Park, constructed on a 5-acre waterfront brownfield site, formerly an Exxon tank farm for petroleum storage. QR&P’s plan for Harborfront Park created a unique new public space for Port Jefferson, a haven of green on a waterfront previously dominated by parking, a park designed for passive uses, focused on the magnificent harbor front views.

The Village of Port Jefferson’s history is tied inextricably to its waterfront. Located on an extraordinary natural harbor on the north shore of Long Island, sheltered by high bluffs on each side, it became an important port during the 18th and 19th centuries and is still active as the harbor for the Bridgeport & Port Jefferson ferry which links Connecticut to Long Island.  Like many other harbor front towns, Port Jefferson’s waterfront was used for a variety of industrial uses in the 19th and early 20th centuries.  A flourishing shipyard was active on the site until the 1920’s and several shipyard structures remained after the site was purchased by Mobil Oil for an oil storage facility which was finally abandoned in the 1980’s, leaving a legacy of contamination and a waterfront cut off from the village center and dominated by parking lots.

In 1997, the Village of Port Jefferson purchased the contaminated brownfield site with the intention of creating a waterfront park, and started an ambitious program to recapture the entire waterfront for public open space.  Quennell Rothschild & Partners started this process with a Master Plan for the entire waterfront and began designing a series of phased construction projects which have transformed the waterfront.

QR&P’s master plan created a unified development for the waterfront, developed in close collaboration with Village residents through public meetings and design workshops. The goal was to encourage access to the waterfront, reclaiming the waterfront from contaminated asphalt paved areas to form a continuous new waterfront esplanade and new park areas to provide a wide variety of amenities for local residents, boaters and visitors. Our master plan included a waterfront area over half a mile in length, and the former Mobil Oil storage site which was transformed into Harborfront Park.

The contaminated site required remediation, monitoring and capping of the contaminated site, and we used the required fill as an opportunity to form a rolling topography that integrates the waterfront site with the hills behind. The former flat asphalt area is now a focal point of the village waterfront, a park with gently rolling grassy hills overlooking the harbor, planted with native trees, woodland and meadow plants and a continuous waterfront esplanade. The park includes a new playground, and restoration and conversion of the 19th century shipbuilding structure into a new Village Center, with a seasonal outdoor ice skating rink.

Our design encourages users to stroll, picnic, fish, enjoy the view or learn about village history and ecology throughout the site. A large central open space provides a natural amphitheater for waterfront concerts and summer festivals. The new play area has become a focus for young children and their parents and includes a custom-built boat play structure, and water play elements featuring marine life.  The play area is surrounded by a sloped lawn for casual games, and a picnic area located among a grove of newly planted trees.

Due to contamination, the Village was required to remediate environmental hazards in the subsoils at the old Mobil site, and our plan, governed by DEC’s Hazardous Waste Division, included covering the subsoil with a geotextile mat, which placed constraints on the location of trees. By incorporating gently sloped hills into the design of the park we were able to plant trees and provide a wide margin of safety in the topsoil protection layer.

Other technical challenges included meeting the engineering requirements for stabilizing the existing shoreline which consisted of a deteriorated bulkhead. QR&P proposed a naturalized shoreline, that could sustain native vegetation and allow for access to the beach, and this proved feasible as the softer edge diminished the wave action and reduced the scouring that occurs along hard bulkheads. This shoreline treatment has been constructed using boulders salvaged from the site and planted with native plants tolerant of saltwater inundation.  Upland areas were planted with dry meadow species and native tree species found in adjacent woodlands that will return health and habitat to the blighted site.

Important elements of the design include the use of native vegetation, gravel paths and decking to encourage infiltration, bioswales to collect and clean parking lot run-off.  Recycled and local materials such as stone for the dry stone walls, reused granite for steps and benches, gravel for the stabilized gravel paths, all contribute to a low maintenance park, and provide opportunities for natural and cultural landscape interpretation on-site. Unseen features, such as the new asphalt cap, relocated 3 foot below grade allow for native plants, trees and grasses to flourish. Also critical is the sub-surface drainage design that protects capped areas and retains runoff on-site. 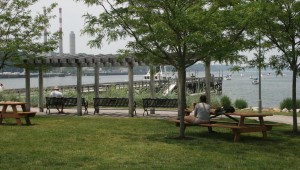 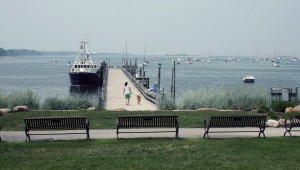 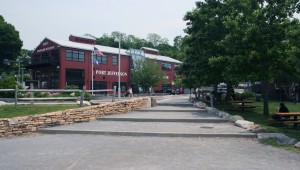 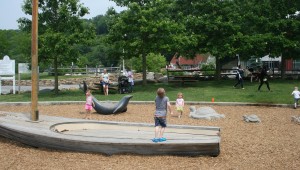 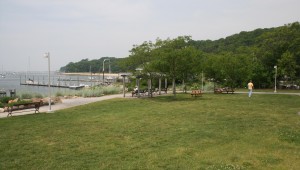 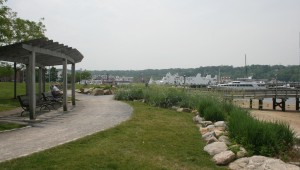 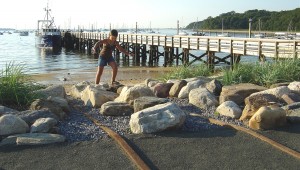 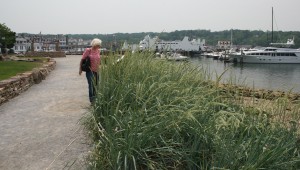