Quennell Rothschild & Partners was part of the Rogers Marvel Architects team selected by The National Capital Planning Commission (NCPC) to improve the security and visitor experience at President’s Park South. President’s Park South is one of the most visited locations in the nation’s capital, and represented a unique design challenge that required sensitive integration of security requirements into a landscape of extraordinary cultural and historic significance. The area includes Sherman Park, the First Division Monument, the Ellipse and its side panels, as well as the associated roadways in the area, including E Street, NW, which has been closed to unauthorized vehicular traffic for the past decade.

The team recognized that President’s Park South physically and conceptually connects the President to the electorate, a unique feature of American democracy, so the design sought to integrate security features in a visually subtle manner, and to reinforce the Ellipse as an event space.  This was achieved by defining the edge of the Ellipse with a new seating wall that includes integrated security measures and pedestrian lighting, and allows for the grade of the Ellipse to be raised.  This subtle change in grade keeps out threat vehicles while maintaining open pedestrian access. The secure perimeter is relocated to allow public activity to thrive, and citizens become more clearly connected to the Executive.

This bold, elegant move allowed for a larger, unobstructed interior public area. The design culminates in a new E Street terrace that joins the enhanced space of the Ellipse with the White House South Lawn. Should threat conditions change in the future, this design could also accommodate re-opening E Street, NW without requiring significant changes.

In their deliberations, the Task Force members noted that the design not only provides security unobtrusively but also improves the existing public space. The design was fundamentally inspired by a phrase in NCPC’s 1997 Extending the Legacy; “the Capital is the product of bold plans conceived in optimism and carried out with conviction.” 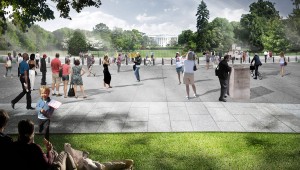 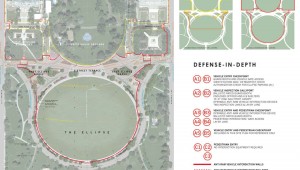 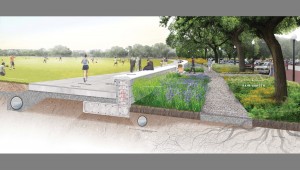