Sited on the historic southern tip of Manhattan, the Battery takes its name from the “battery” of cannons erected by Dutch settlers in the 1600s. Over the centuries, the Battery was a pleasure ground, a memorial landscape, and hosted the first official immigrant receiving station.  What was a worn, formal, Moses-era park a mere twenty years ago is now a lush destination for over seven million tourists and New Yorkers who come here each year to board a ferry, visit the memorials and urban farm, stroll the Bosque Gardens and waterfront promenade, and take in the magnificent views of New York Harbor.  Quennell Rothschild & Partners worked closely with NYC Parks and the Battery Conservancy on this $14M, 12-acre redesign which includes an expansive new gathering space, a pastoral bikeway, a monument walk, and streamlined circulation.

Battery Oval: Two acres of Kentucky bluegrass and tall fescue, shaded by 38 stately trees, carpet a sweeping oval lawn that can accommodate 9,000 people. Those arriving at the Broadway entrance are treated to dramatic views of Castle Clinton.

Monument Walk: The park hosts 23 monuments to our nation’s explorers, defenders, and inventors.  Previously scattered haphazardly around the park, ten of these sculptures have been restored and moved to the park’s perimeter, providing focal points at all the major streets leading to the park.

Planting:  The longevity of the park’s 250 mature trees has been assured through new paving that preserves their root systems. Unnecessary paths have been removed, making way for more lawn and woodland where the trees can spread above and below ground.

Circulation:  Former conflicts between pedestrians, bikes, trucks and buses have been resolved. View-framing plantings enhance the main entrances, while new entrances connect the Battery with Pier A to the west and Peter Minuit Plaza to the east. The sidewalk, now equipped with benches and trees, defines zones for buses and pedestrians.

To reinforce its role as the city’s first line of defense against hurricanes, the park has also become more pervious. By reducing paving and replacing mown lawn with native grasses, Quennell Rothschild & Partners have prevented any additional stormwater from being generated.

The Battery is a beautiful, sustainable, 21st-century public space worthy of its cultural, archaeological, and historic significance. 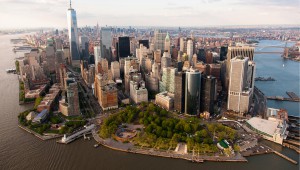 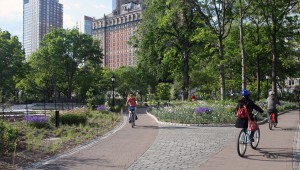 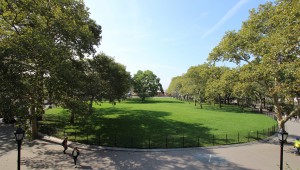 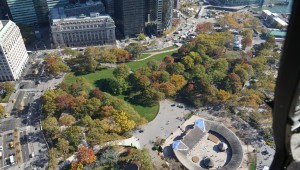 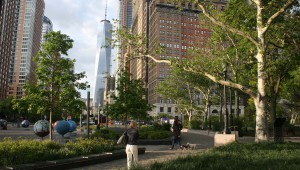 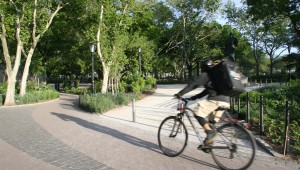 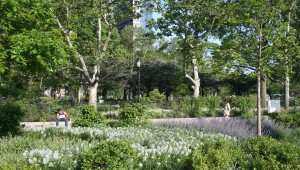