Home of the Occupy Wall Street movement, this privately-owned public space was transformed by Quennell Rothschild & Partners and Cooper Robertson Architects after being heavily damaged by the events of 9/11. It’s now a successful urban oasis with trees, benches and tables, enjoyed by thousands of workers, shoppers and tourists.

Diagonally opposite the World Trade Center site, this full-block plaza was constructed in the 1970’s in conjunction with the Skidmore Owings and Merrill designed office tower to the north. Through a linear grove of 54 honey locust trees and granite paving set with 500 in-ground white lights, the design emphasizes the diagonal axis of pedestrian movement between the subway and PATH stations to the west and the Financial District to the east. Mark di Suvero’s 70-foot-tall red steel sculpture forms a beacon that announces the park from Broadway.

At the opening ceremony in 2006, after just 10 months of construction, then Governor George Pataki said, “the park has been re-imagined as an urban oasis, and just like the new Lower Manhattan, it too will be vibrant day and night with 500 twinkling lights making it a welcoming space for workers, residents, and visitors.” The park became immediately popular, home to lunch-time food vendors, chess games at the permanent chess tables, and one of the city’s smallest green markets. The park received the 2008 American Institute of Architects Honor Award for Regional and Urban Design. 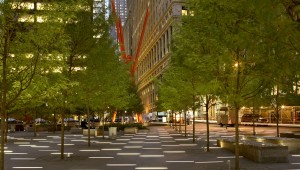 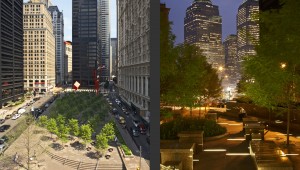