Named one of the 2017 Great Places in America by the American Planning Association, Rosa Parks Circle has become a catalyst for reshaping downtown Grand Rapids. The park encourages interaction during all seasons, whether it is ice skating, evening concert-going, or meeting for lunch. The piece becomes the gathering place and the public becomes the art.

The City of Grand Rapids and the civic-minded Frey Foundation initiated this project as part of an overall effort to revitalize downtown. They selected artist Maya Lin to create a signature artwork.   As her concept expanded from a simple focal object to encompass both the corner and a derelict plaza, she chose Quennell Rothschild & Partners to collaborate on a comprehensive design for the three-acre area.  The firm worked closely with Ms. Lin throughout to ensure her unique sensibility was integrated in every aspect.

The Rosa Parks Circle emerged as a radical, surprising counterpoint to the adjacent, primarily paved public space: green, subtle, sequential and unpredictable. It provides an experience as opposed to presenting a fixed design. Because of the site’s proximity to the Grand River, water is featured throughout. The elements within the park – the skating rink, the bubbling water fountain, the fog fountain, and the wave-like earthen mounds – capture water in each of its three states: solid, liquid and vapor.

The amphitheater/skating rink at the heart of the park is surrounded by terraced seating arranged in concentric rings, reminiscent of ripples caused by a drop of water on a still pool. From November through March, it’s a skating rink lit by 165 fiber-optic lights, which are embedded in its surface and laid out in a pattern representing the constellation of stars over Grand Rapids on January 1, 2000 — the new millennium and the day construction began.

The project has dramatically transformed the city’s urban core, drawing year-round crowds at lunch hour, in the evening, and on weekends. Situated at the historic focal point of the city, Rosa Parks Circle provides a civic gathering place for concerts, a farmers’ market, polka dancing and many other community activities — even an annual city-wide pillow fight. As a winter destination, the plaza hosted 23,000 skaters in the first year, and the numbers have grown steadily.

Because of its greener surfaces and the presence of water, the project has dramatically changed the real and perceived microclimate of the site, combating the urban heat island effect. Native plant species were selected to reflect the natural plant community of the Grand River basin, and materials for the landscape were locally-sourced and fabricated. Both gravel and unit paving were selected to allow for easy repair and resetting over time, rather than necessitating complete replacement. The plaza functions as part of an efficient community steam infrastructure system. Refrigeration for the ice skating rink functions in a balanced system with a snow melt system making the entire streetscape surrounding the plaza safe and habitable in the winter. 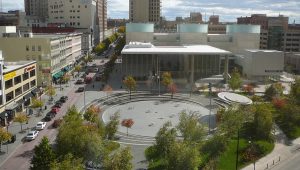 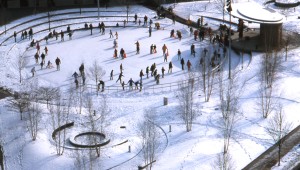 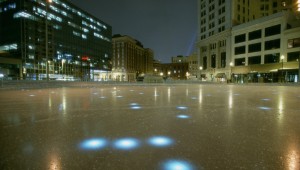 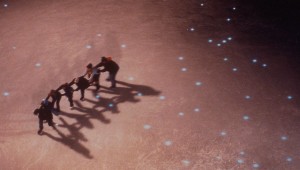 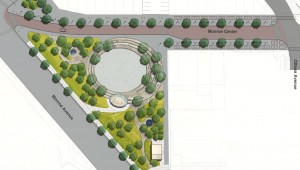 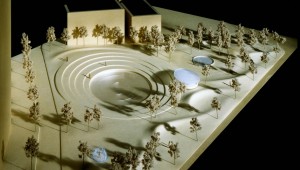 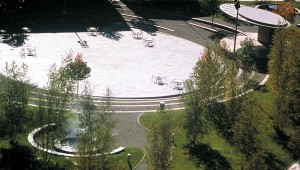 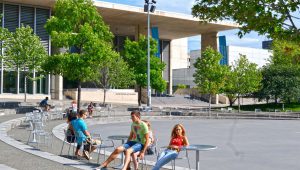 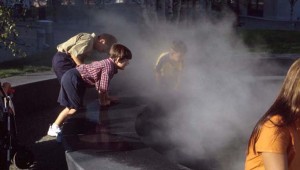